This Award recognises the outstanding contribution that The Birds of Sussex has made to our understanding of birds in the county. The publication – known as an avifauna – describes the current status and changing fortunes of all the wild birds of Sussex over the last 20 years. The text is based on the analysis of over two million bird records, as well as data collected by an army of more than 300 volunteer bird surveyors for the Bird Atlas project during the winter and breeding seasons of 2007-11.

Adrian Thomas, Editor of The Birds of Sussex, said “It is fantastic to see the hard work of all the volunteers who took part in the field work, collecting the information needed, and that of the team who made this publication possible recognised in this way. We now know a lot more about Sussex’s birds and are better placed to help those in need of help than ever before.”

The Birds of Sussex is 608 pages long and includes over 200 charts and figures, as well as photographs of the county’s habitats and nearly 300 species of birds. It has proved hugely popular with members of the SOS and birders everywhere – so much so that the entire print run  sold out within a year. 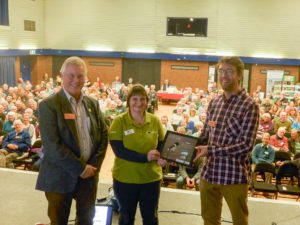 The formal presentation of the Award was made at the SOS Conference in January, but we had to keep it “under our hats” until the official announcement from the BTO & British Birds was released.

Donate to the SOS